Vintage characters like Howdy Doody and Groucho Marx sit on a high shelf in Puppet Heaven.

They had never heard of Elmo in Benin, West Africa. Alban Odoulamy, owner of Puppet 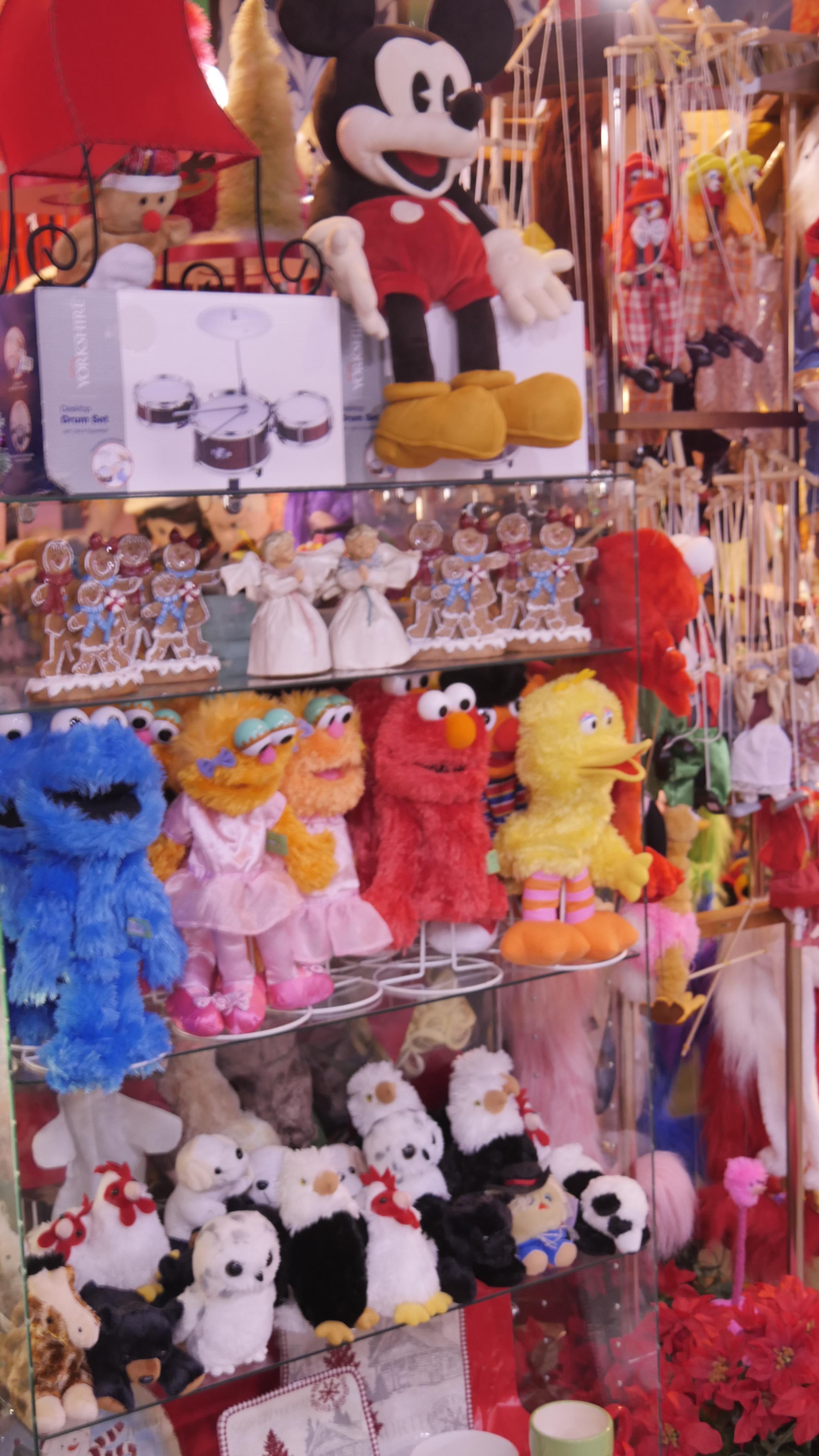 Every location, from floor to ceiling, is full of puppets of all kinds at Puppet Heaven.

Heaven tucked away in a corner of Crystal Square Arcade says, “All the little kids walking past my puppet showcase are screaming at their mother, ‘There Elmo!’ They don’t see Big Bird or anyone else; it’s just Elmo.

Odoulamy has jumped everywhere, occupying several spaces in the underground shopping arcade, since he opened his first puppet store on April 15, 1996. “The first space was very small, affordable at the time. His first shop was called La Marionette because his mother tongue is French and he had been trained as a puppeteer in his country. “There have been a lot of changes in 25 years.
Odoulamy said he would never have gone in this direction if not in 1983 when he was employed by Benin’s only government television station. “They had a new children’s program on TV, so they trained the three of us to be puppeteers.” He sometimes adds that they used the children’s puppets to work on a political message.
At first, Odoulamy sold his own homemade wooden puppets. But he found that the kids who came to his first store asked to see puppets and whatever they saw on TV.
He always listens to what people are saying and has gradually expanded his store to add a variety of choices. Now you see floor-to-ceiling puppets, stuck in corners, hanging from hooks. A tall shelf inside the door features Howdy Doody, Groucho Marx, and Bozo the Clown lined up in a row. A two-foot-tall wizarding puppet greets visitors alongside a princess dressed in white. A box of finger puppets is stuck among cartoon characters and ventriloquist dolls.
Odoulamy is also a painter, so he combined his next store with a workshop where he was able to paint puppets but also work on his own oil paintings. Odoulamy says his first trip to the United States in 1990 was not about puppets. “The Ambassador of Benin asked me to exhibit my paintings at the Pepco Center. He points to a sketch on the back wall of his shop. “It’s my father who paints in Benin, and it’s me at five and my brother on the floor.”
Odoulamy has a few of his paintings scattered around the store among the puppets. “See this oil I painted in 1990 is not just someone on a bicycle. You see that he carries a lot of luggage and that the bike goes up and down, like our life. But the pink shows that he is still happy.
Odoulamy takes out a rod puppet from a box of choice. He pushes a 6 inch stick upward through a purple cone with a jerk. A green frog appears. Odoulamy waves the stick and the puppet tilts to the right. Odoulamy’s animated face begins a conversation with an imaginary child. “The little ones always love cuckoos.” Odoulamy explains that he was doing shows for birthdays and other events and hopes to do it again when he has more free time. 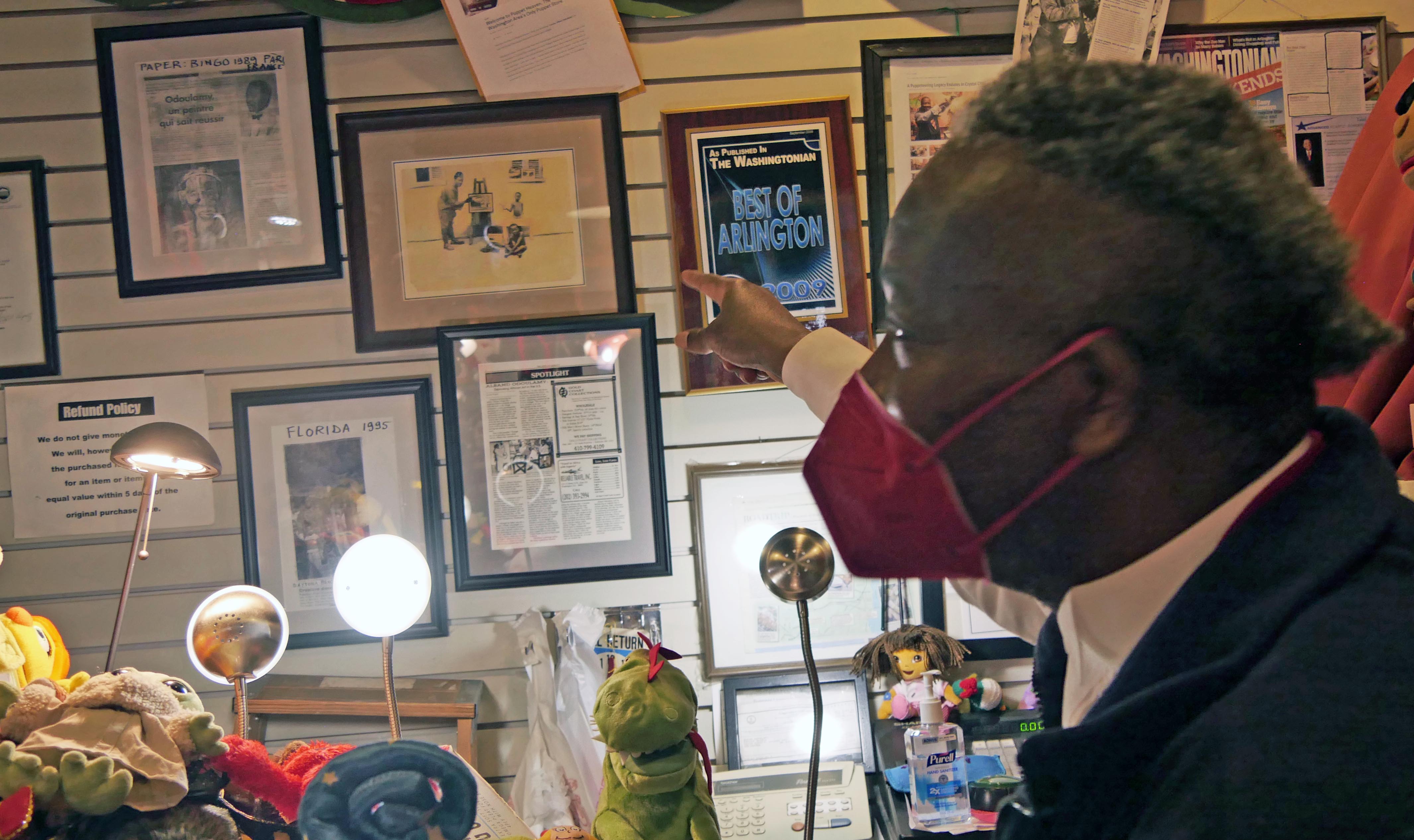 Odoulamy is a painter, like his father photographed in Benin, West Africa, when Odoulamy was five years old.
All kinds of people buy puppets from the smallest children to churches and schools for performances to lovers who buy Lambchop as a token of affection on Valentine’s Day. A woman walked in and bought 20 of the more expensive ones. “I asked her if she was planning on selling them and she told me she was a collector.” Odoulamy said that some people buy puppets online, but most people like to see and touch them in person. “A child may think he has seen a large puppet but find it small when he sees it in person.”
Puppet Heaven is open 1 p.m. to 7 p.m. Monday through Saturday at 1625-A Crystal Square Arcade. For more information: www.puppetheaven.com